The ex-Silver Slugger winner -- and current internet troll -- just went off on his former team in spectacularly sexist fashion ... blasting the Giants for becoming the first MLB squad ever to hire a full-time female coach.

"I got in trouble for wearing a thong in my own clubhouse when female reporters were present," Huff said. "Can’t imagine how it will play out with a full-time female coach running around. This has #metoo & #BelieveAllWomen written all over it."

Of course, the Giants couldn't possibly have a more opposite take than Huff ... they said Alyssa Nakken will change their clubhouse in a way not many people EVER could.

In fact, Giants manager Gabe Kapler said of the ex-Sacramento State softball superstar that he's "delighted" to have her be around the team in 2020.

But, Huff -- who won two World Series titles with SF in 2010 and 2012 -- continued with the sexism anyway ... telling former teammates Brandon Crawford, Brandon Belt and Buster Posey to "Have fun with that."

Go ahead and add this to the long list of Huff's controversial -- and, clearly, sometimes terrible -- takes ... 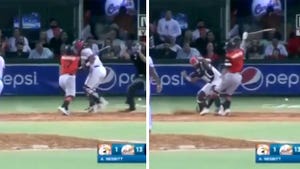