The San Francisco Giants just made a groundbreaking addition to their coaching staff -- the organization just hired the first full-time female coach in MLB history!!!

Alyssa Nakken -- who worked with the Giants' health and wellness initiatives and events the past 2 years -- was a superstar for the Sacramento State softball team from 2009-12.

The 29-year-old was a 4-time All-Pacific Coast Softball Conference selection and was first-team all-league in 2012.

Giants manager Gabe Kapler introduced Nakken and fellow assistant coach Mark Hallberg on Thursday ... saying, "Alyssa and Mark are highly respected members of the organization and I'm delighted that they will now focus their talents on helping to build a winning culture in the clubhouse."

"In every organization, environment affects performance, and baseball clubhouses are no different. That's why in addition to assisting the rest of the coaching staff on the field, Mark and Alyssa will focus on fostering a clubhouse culture that promotes high performance through, among other attributes, a deep sense of collaboration and team." 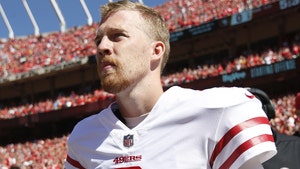