11:44 AM PT -- A new angle of the black bear run-in proves one thing ... the lady who was nearest to the creature has ice in her veins, 'cause she fired off a selfie when Bongo here was too close for comfort.

This girl has nerves of steel.

She actually took a selfie with the big guy... pic.twitter.com/I3Ezyn8q7G

Check it out ... the bear gets up on its hind legs and is pretty much right up against the woman, who doesn't fret ... in fact, she calmly whips out her phone and snaps a shot, almost like they were hiking buddies or something. Meanwhile, a man filming from a distance is trying to shoo the bear away like it was a household pet. Looks like it worked -- the bear eventually got back and down and crept away slowly.

This may be the scariest video of the month ... a super curious bear spotted a few women, approached them, sniffed them, got on its hind legs and seemingly hugged them, and they lived to tell about it!!!

It went down Saturday in Mexico at the Chipinque Ecological Park. You see the bear at one point putting its paw on one of the women, almost nuzzling her.

As most people know, bears often attack when people panic or run, and how can you not when a bear is all over you?!!?

Well, these folks are amazing. They remain clam -- and pretty much still -- as 2 men in the background try to scare the bear away by talking loudly.

The bear eventually has had enough and leaves, and boy ... you can only imaging the heart rate of those women.

So here's what authorities say about black bears that get too close ... "Stay calm, never stand between a baby and its mother, do not go near or feed them, take shelter and watch it, avoid photographing it or taking selfies."

Yeah, selfies would be a real bad move. 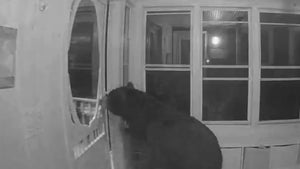 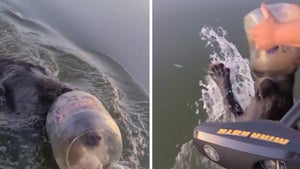