Take this with a big grain of salt, BUT ... we may have a legit UFO sighting on our hands here, people. Give it a gander and decide for yourself.

This footage was taken Sunday out in Long Beach, CA -- about 25 minutes south of central L.A. -- and it appears to show a UFO-like object in the air bolt across the sky at lightning-quick speed and disappear out of frame -- all while of-this-world fighter jets fly above.

The person who shot this insists it is not altered or edited at all -- if you buy that, then you gotta ask what the hell it is that zips across the camera's frame if only for a moment. Watch it as many times as you need to -- we even slowed it down/paused it for a close-up view. 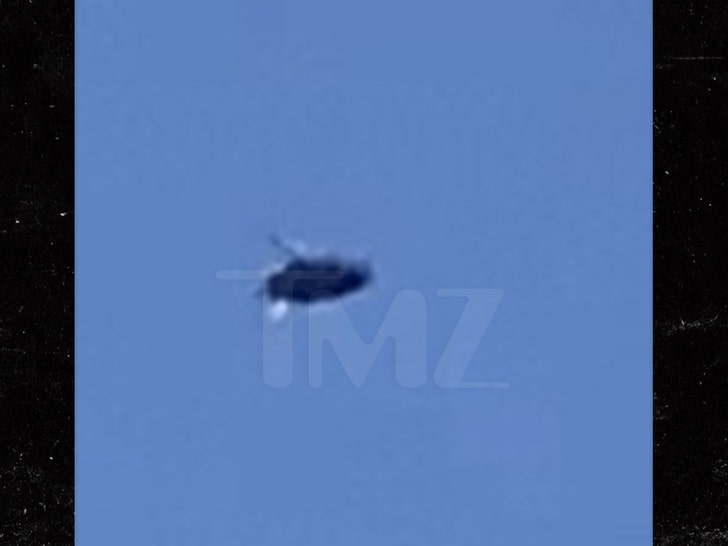 If you look (and listen) carefully, you can see a black dot -- perhaps in a saucer shape, although it's hard to tell by how high it is -- flash across the screen and disappear.

At first glance, one could argue this looks like anything but a flying saucer -- could be a raisin, a fly or nothing at all. OR ... it could very well be aliens checking in on us (again?).

As for the jets you can hear in the background as well, we're told they were out there in LB flying around for no apparent reason for about 10 minutes or so. Unclear if their presence had anything to do with this alleged UFO sighting, but hey ... they could be related.

There's been other purported sightings in that area too of late -- about a couple weeks ago, someone posted another video of a strange object flying in the sky around sunset. They claim this was shot from about 2 miles away and at a height of 1,000 feet, more or less.

The YouTube user also says the thing disappeared on him when he stopped filming, but you don't see any of that on camera. Could just be a kite on a super long string -- or ... ALIENS!!

One last thing to consider ... the New York Times did a story this past week about Pentagon bigwigs working in their UFO Unit (yes, they have one of those). One of the subcontractors who used to work for the feds told the paper he recently briefed a Defense Dept. agency about "off-world vehicles not made on this earth" that they'd retrieved over the years.

The Pentagon also said they plan to make some of these findings public in the near future. So ... this might not be so far-fetched if Uncle Sam's ramping up to have a talk with us 👀