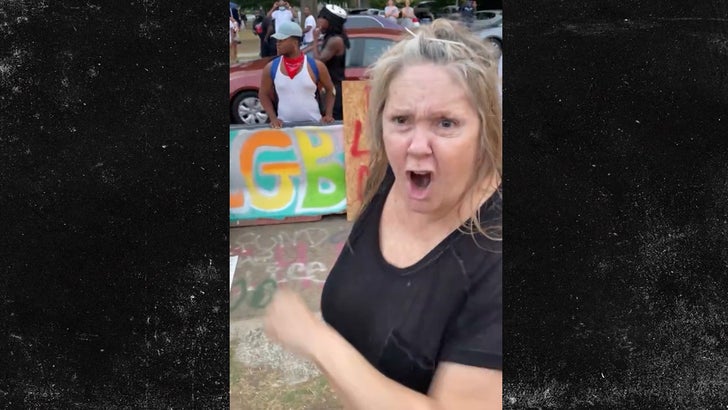 The sight of a George Floyd 3D hologram is pissing off racists -- at least one of whom flew into a rage and spewed the n-word at spectators.

The disturbing altercation went down in Richmond, Virginia where the Floyd hologram was projected above the site where a Robert E. Lee statue had stood a month ago. As a crowd gathered for the event, a white woman started yelling, "This is my city" ... prompting some people to push her away.

A nearby man immediately told her to get lost (that's the clean version) -- at which point several people shoved her away from the event ... narrowly avoiding more violence.

Amazing hologram of George Floyd in Richmond. You can hear the Floyd Family speaking in the background. #richmond #GeorgeFloyd pic.twitter.com/0uFK7ePsAc

The event was dubbed "A Monumental Change: The George Floyd Hologram Memorial Project." As we reported ... the hologram first appeared in Richmond and it'll make stops at 5 other sites including some in North Carolina and Georgia.

The tour will pretty much follow the same route as the 1961 Freedom Rides during the Civil Rights era -- hopefully, with far fewer racists outbursts.