The Dallas Cowboys QB spelled it all out in a powerful letter to Gov. Kevin Stitt and the Oklahoma Pardon and Parole Board.

"Please don't let another innocent black man die from the systemic mistreatment that has plagued our nation for far too long," Prescott wrote.

Jones was accused of murdering a white man during a carjacking in 1999 when he was just 19-years-old. He was later convicted at a jury trial in 2002 and was sentenced to death.

But, Prescott says there are huge problems with the case -- telling officials, "I firmly believe the wrong person is being punished for this terrible crime."

In his letter, obtained by TIME, Prescott claims, "an evaluation of the process that led to Mr. Jones’ conviction raises serious legal and ethical concerns. I implore you to right this wrong."

Jones has spent the past 18 years in a cell, staunchly proclaiming his innocence -- and fighting like hell to have the conviction overturned.

Jones believes he was framed, and given an unfair trial for a bunch of reasons. He also claims racism played a huge role in the jury's conviction decision.

In fact, his whole story has become famous after it aired in a 2018 ABC docuseries, "The Last Defense."

"The treatment of Julius Jones is the kind of miscarriage of justice African American men like myself live in fear of, and that is why I feel compelled to use the influence that God has blessed me with to speak up for what I believe is right and to give a voice to those who cannot speak for themselves," Prescott wrote in his letter.

"I ask for you to please do your part to help bring about this change by giving thoughtful and sincere consideration to your review of Julius Jones’ commutation application. My prayer is that he is able to salvage what remains of his life and that, through the righting of a decades-old wrong, he will be restored to his family soon." 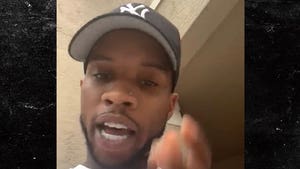