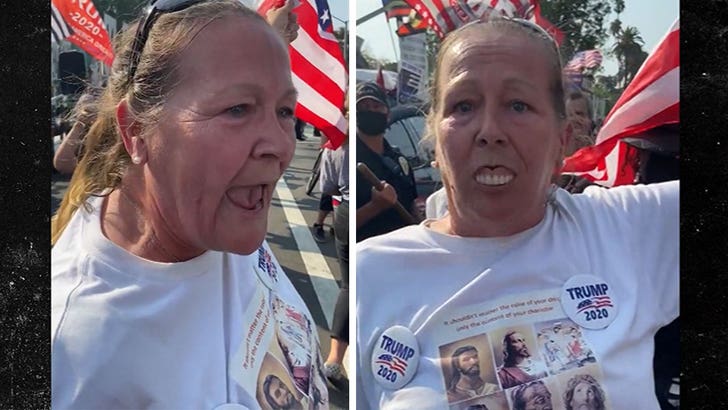 8:55 AM PT -- The woman apparently has a pattern of being fired up and getting in people's faces at these kinds of rallies.

Over the weekend, Carla went to a rally in Bev Hills and was in the thick of an argument over defunding the police. Only this time, she was behind the camera calling another women a "Karen" and didn't have any denture issues.

A woman decked out in Trump 2020 gear unleashed a hateful, xenophobic attack at a counter-protester, but her efforts were blunted by some loose dentures.

It seems this all went down at some sort of Trump rally. The woman who says her name is Carla ... tells an Asian woman to go back to where her ancestors came from.

Problem is ... Carla's dentures keep falling out. She struggles in her verbal attack ... it's hard to keep a stiff upper lip when your chompers aren't secure.

Boy ... this tirade was so bad even her dentures wanted a quick escape.

You Might Want to Rethink Humor Insane Videos Politix