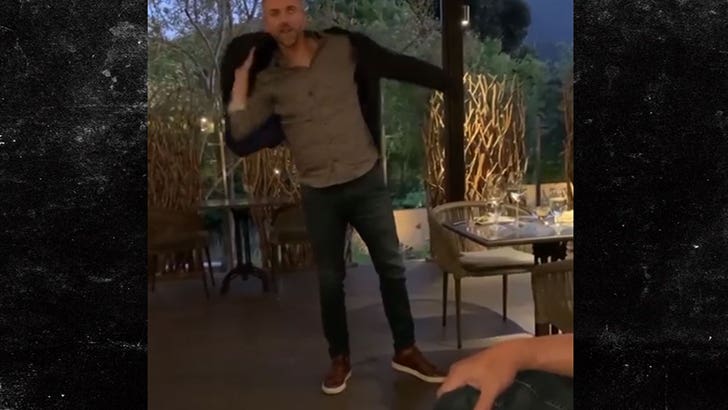 3:07 PM PT -- TMZ's learned phones have been ringing off the hook at Lucia, the restaurant at Bernardus Lodge & Spa where Lofthouse spewed his racist rant. We're told since the July 4 video went viral over the last 24 hours, customers have been calling to show support to both the Asian family and the waitstaff for how they handled the situation.

For instance ... we're told longtime customers and others have called asking how they can get upwards of $1,000 to the waitstaff and offering to cover the family's meal. And, get this ... some have also sent floral arrangements to the hotel with notes commending the staff. Others who called expressed outrage over what they saw.

As for Lofthouse, we're told the Sheriff's Department is investigating the incident as well after a call from the targeted family.

A man unleashed a viciously racist verbal attack against a family that was doing nothing but minding their business -- and it turns out ... the guy's the head of a major IT company.

The guy here has been identified as Michael Lofthouse -- CEO of cloud-computing startup Solid8 out in Silicon Valley ... and he was caught on camera this past weekend in Monterey, CA going off on a group of people who were of Asian descent. Lofthouse himself is from the U.K.

Anyway, the video starts after he'd apparently said something pretty vile from his table at a restaurant ... but when the people he attacked started recording him, he clammed up. Only briefly though, because Lofthouse eventually cut loose again, calling the person recording him an "Asian piece of s***."

He went on to invoke President Trump's name ... saying POTUS was gonna screw 'em in November. An employee demanded Lofthouse get the hell out.

The woman who recorded this says the guy's attack was completely unprovoked. She went on to post info about him, including a back and forth in a comment section which appears to show him threatening to kill a guy who called him out for his behavior.

Lofthouse has since gotten rid of his social media accounts. Solid8 hasn't spoken on it yet.

Now, here's a little more context. According to Stop AAPI Hate (an org that documents incidents of discrimination against Asian-Americans and Pacific Islanders) ... 832 people in their community have self-reported experiences of harassment in the last three months.

That jibes with what we've seen on the streets, especially in L.A. ... with folks like SoCal Karen spewing hate.

The reason for this uptick? Well, the Prez has been blaming China for coronavirus for months now. Still think his "kung flu" jokes are harmless?