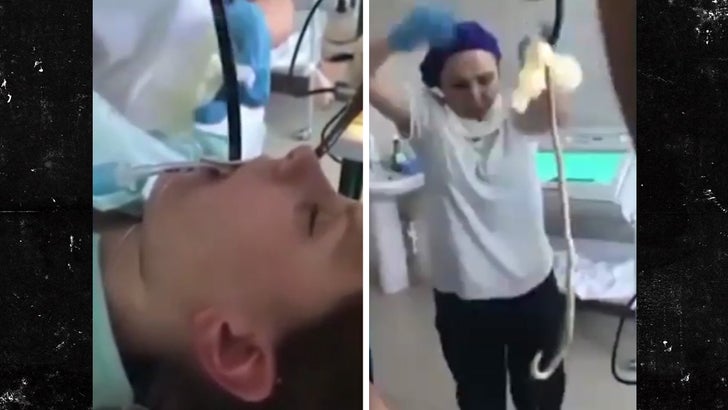 This woman wanted to catch some ZZzz but instead had a SSssslithery nightmare after a 4-foot snake crawled into her throat!!!

The horrifying video was taken in Russia where doctors treated a woman who was rushed to the hospital saying she was not feeling well. She had claimed -- brace yourself -- a snake slithered into her mouth when she fell asleep in her yard. What the hell, Russia???

You can see from the video ... doctors are horrified after pulling the serpent out of her mouth. They're also terrified it's one long-ass snake ... relatively speaking considering it was apparently inside a WOMAN'S THROAT.

It's unclear if the snake was dead or alive at the time of extraction. Also, we can't confirm this vid is totally legit -- either way it's a totally terrifying sight.

The Ministry of Health in Republic of Dagestan is reportedly investigating the video and the chief doctor at the hospital where this allegedly went down said she was unaware of doctors performing the procedure at her facility.