It's small comfort, but Americans aren't the only people who want to fight over wearing a mask, because a cop and a passenger went ballistic on a Liverpool train over face coverings.

The passenger was sitting on the train without a face mask, when he was approached by a British Transport cop, who explained the drill ... you wanna ride the train, wear a mask.

The cops reportedly got involved after someone called in and said a man was coughing on passengers. Cops boarded the train and encountered 34-year-old Anthony Baldwin, and things quickly turned physical.

Baldwin claimed he had underlying health conditions and, under the laws of Great Britain, he would be exempt from wearing face coverings.

The officer was having none of it and began grabbing at Baldwin, trying to get him off the train. Other passengers are screaming at the cop for getting aggressive, claiming the man had a medical condition. At the end of the video, it appears the cop unloads what appears to be pepper spray on Baldwin.

A slew of cops then grabbed Baldwin and took him off the train, as passengers screamed at the cop who confronted him. Baldwin was reportedly charged with threatening behavior and assaulting a police officer. 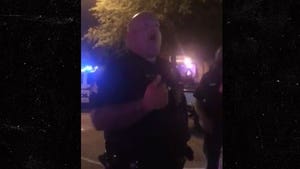 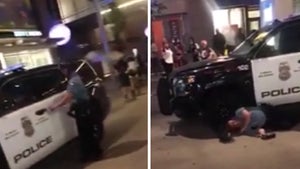 Minneapolis Cop Knocked Down After Garbage Can Lid Thrown At Him

You Might Want to Rethink Ride Me Police Fights & Feuds