5:01 PM PT -- The Lightning are addressing the safety precautions (or lack of) at their public Stanley Cup celebration ... telling TMZ Sports they did their best to keep players and fans safe.

"The Lightning has been proud to share the 2020 Stanley Cup win with our fans in Tampa Bay over the past two days. We have been overwhelmed by the support displayed across our community for our players and for the sacrifices they made to win the Cup at such a difficult time."

"To honor our team and the Stanley Cup’s first trip back to Tampa Bay in 16 years, we worked diligently with the City of Tampa, Hillsborough County and others to create socially distant, outdoors celebrations, spread out over two miles on the Tampa Riverwalk and at a less than 20% of capacity at Raymond James Stadium."

FILE UNDER -- things you should NOT do during a pandemic!

Here's video of Tampa Bay Lightning players completely ignoring COVID-19 guidelines ... passing around the Stanley Cup to fans and allowing them to drink from it.

Not only players get to drink from the Cup pic.twitter.com/NYcOk5wLoV

Just hours after the team had its parade to celebrate its championship win over the Dallas Stars -- Alex Killorn and Nikita Kucherov took Lord Stanley to Tampa streets.

And, in a complete brain fart given the state of the coronavirus, they gathered in crowds of mask-less people ... and poured booze from the top of the trophy into people's mouths.

Obviously, it's a big no-no during pandemic times ... but even if COVID-19 were under control, it's probably not the most sanitary thing to do.

We've reached out to the Lightning over the videos ... but so far, no word back yet.

Meanwhile, it doesn't seem like the Lightning players -- who were all locked away in the NHL bubble throughout their playoff run -- have plans of stopping their party anytime soon.

Killorn got on the mic and shouted out Florida governor Ron DeSantis for opening up bars to allow celebrations to continue.

"I want to thank the Governor for opening the bars just in time for the boys. THANK YOU!" #GoBolts @Akillorn19 pic.twitter.com/2WlkJov3df

Love the enthusiasm ... but guys, please be safe!! 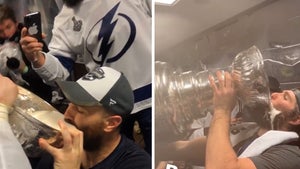