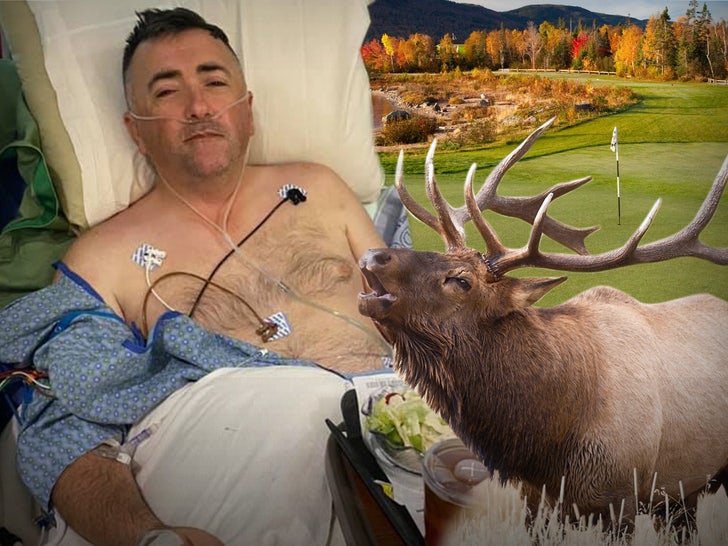 A Colorado golfer nearly died on the 17th hole of a course Saturday ... after an elk rammed the man's cart and gored him straight through his back with its horn.

The story is insane ... Megan Bornhoft says her husband, Zak, was finishing up a round at Evergreen G.C. in Evergreen, Colo. with his buds -- when disaster struck at around 6:30 p.m.

Megan says an elk charged Zak's golf cart ... and speared the man in "the right side of his lower back" with its horn.

Megan says Zak was rushed to the hospital ... and after doctors checked him out -- they found some horrific injuries.

"His kidney was cut into two pieces," Megan said.

To make matters worse ... because of the dirt and bacteria on the elk's horns -- Megan says docs were deeply concerned about possible infection.

Fortunately, Megan claims her hubby -- despite being in a helluva lot of pain -- is expected to make a full recovery.

"The urologist thinks the kidney will be able to repair itself!" Megan said, before adding, "He continues to be in a tremendous amount of pain, but is handling it in true Zak fashion...dry humor!!"

For his part, Zak said of his injuries, "I’m in a little bit of a rough spot, but I’m gonna get through it."

As for the golf course, it issued a statement Monday warning golfers to avoid elk on the course at all costs.

"Right now, while the fall rut or mating season is going on, the elk tend to be more aggressive," course officials said. "Proceed with caution when around the animals and NEVER APPROACH ANY ELK!" 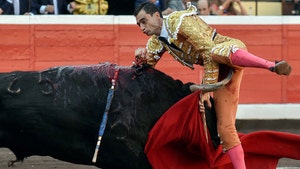 Bullfighter Gored In the Crotch In Spain, Graphic Photos