The First Lady was cheerfully tagging along with the President on his way to the debate this past week ... or so it seems, because an awful lot of people don't think it was actually her.

Here's a photo that was taken Thursday ahead of the debate in Nashville between Donald Trump and Joe Biden ... in which DT is seen boarding a chopper with who appears to be his wife, Melania, already on board, smiling at the crowd that was bidding them a farewell.

Where did her smile wrinkles go? Teeth are different. Lips are different. Smile is different shape. It is so obviously a #FakeMelania pic.twitter.com/xChVEthWG0

We say appears because a crap ton of folks have studied this photo and others captured in the same few seconds ... and they believe this lady's a FAKE stand-in, not the real Melania at all. Prepare yourself -- this is a deep dive, but stupidly important work nonetheless.

I don’t typically get into this kind of this, but it’s the teeth for me. 🤷🏽‍♀️ pic.twitter.com/N6yYeDdgQx

Some have gone to the extreme lengths of zooming in and comparing the lines around her mouth ... not to mention playing dentist and seeing differences in the teeth. By most accounts, the mugs here just don't match up -- from chomper size to the curve of her smile ... many Twitter truthers simply aren't buying this is the real McCoy, but rather ... a look-alike.

BTW, this isn't the first time a "fake Melania" theory has surfaced. It's cropped up at least twice before -- most notably, in 2019 ... when Trump and Melania visited tornado-stricken Alabama to survey the damage. She was rocking massive shades then too ... but many said there's no way that was FLOTUS -- speculating she's got a few different body doubles.

Trump, for his part, has denied this -- calling it "fake news" and claiming photos of his wife that don't look quite like her are photoshopped by haters. However, considering her well-documented hand-dodging with the Prez ... people think it's feasible this is a thing. 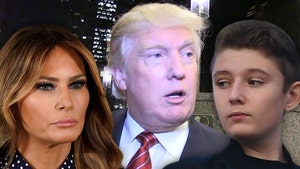 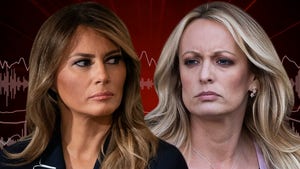