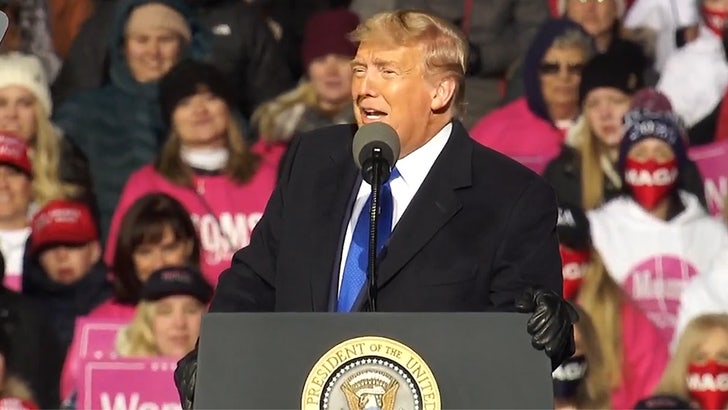 President Trump's rally at an Omaha airport left hundreds of his supporters feeling ice cold ... and several ended up in the hospital!!!

After Trump finished addressing a large crowd Tuesday night at Omaha's Eppley Airfield -- where he said, "Is there any place you would rather be than a Trump rally on about a 10-degree evening?" -- the bundled-up Prez got back on Air Force One and jetted off ... as temperatures got even colder.

Thousands of people left out in the cold and stranded in #Omaha, #Nebraska after a #Trump rally. I’m told the shuttles aren’t operating & there aren’t enough busses. Police didn’t seem to know what to do. Some walked. I saw at least one woman getting medical attention. pic.twitter.com/oIkmixaZt0

Now, Trump was exaggerating -- it wasn't 10 degrees -- but the temp was below freezing and when his supporters had to wait to get on shuttle buses to take them back to distant parking lots, it became a major problem.

The buses were unable to accommodate for the amount of people waiting, leaving attendees standing in the cold for hours ... including many elderly folks.

The above video & this one were taken around 10:15pm. The #Trump rally ended around 8:45pm. Some just gave up and walked from the airfield, back to wherever they parked. It was about 32° out at the time. Many had already spent hours outside as they waited for POTUS to arrive. pic.twitter.com/JYXCLypTQl

Police tried to help get the most at-risk people to warmth and safety, but at least 7 people were reportedly taken to local hospitals. After waiting for hours, many people gave up on the buses and walked to their vehicles about 3 miles from the rally site.

According to the Trump campaign ... it provided enough buses for everyone, but there was a traffic jam on the 2-lane road leaving the airport after the event.

Typically, Trump rallies are inherently dangerous due to the lack of face coverings in the midst of the COVID-19 pandemic -- but in late October in Nebraska, there are other risks too.