Jonathan Mattingly -- one of the officers involved in the fatal shooting of Breonna Taylor -- is suing her boyfriend, Kenneth Walker, for shooting him in the leg during the raid.

The Louisville officer claims Walker's actions were "outrageous, intolerable, and offends all accepted standards of decency and morality." Mattingly says since March 13 -- the night he and 2 other officers busted into Taylor's apartment and killed her -- he has experienced "severe trauma, mental anguish, and emotional distress" due to what Walker did to him.

As we've reported ... Walker claims he fired a shot because the cops didn't ID themselves and he thought they were home intruders. Mattingly says they did announce themselves several times as cops. He says when they broke in, he was shot with a 9mm.

The cops were at Taylor's home as part of a failed narcotics raid. No drugs were found, and Breonna had no criminal history.

Walker was initially arrested for attempted murder, but those charges were later dropped. Walker sued the Louisville Metro PD for misconduct, and also sought immunity based on Kentucky's "Stand Your Ground" law.

Mattingly's now countersuing, which Walker's lawyer calls a "baseless attempt to further victimize and harass Kenny" and insists he was acting in self-defense.

Mattingly is suing Walker for emotional distress and assault and battery. 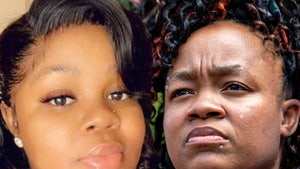