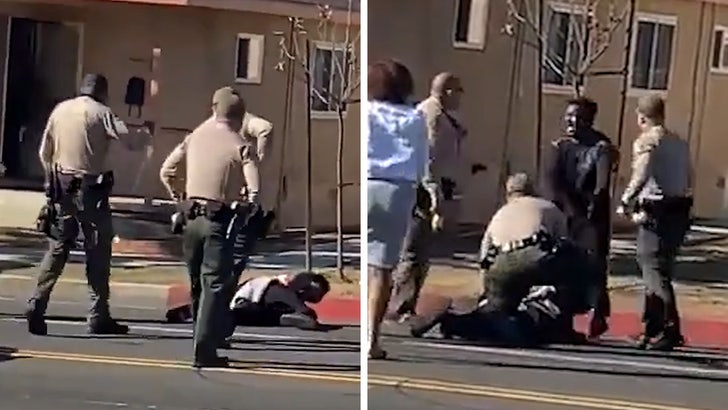 A man who tried to flag down cops to assist with a car accident is now hospitalized after deputies tased him -- but cops say they took him down because of how he was acting.

L.A. County Sheriff's deputies were responding to the car crash Tuesday when the man ran into the street and blocked their patrol car. People on the scene say the man was trying to get the cops' attention for the accident victims.

However, law enforcement sources tell us the man got hostile when deputies got out to speak with him ... so they tased him. In the video, you see another man run out of a nearby house and yell, "He's not in his right mind" ... referring to the man who was being tased.

Deputies also took down the second guy, slamming him to the ground ... without deploying a taser. We're told both men -- who are related -- were taken to a hospital to be evaluated for injuries. While the second man was cited for battery and obstruction and released ... we're told the guy who was tased is still in the hospital.

The entire incident is under investigation by the Sheriff's Dept. due to the use of force.

Homeless Woman Hog-tied By CHP and Removed From Abandoned Home