3:56 PM PT -- A rep for the Sheriff's Department says the officer involved was a School Resource Officer who was in the process of trying to stop the student from fighting another student. They tell us, "Our office is in the initial stages of our investigation. We are collecting video, witness statements, and relevant information related to the incident."

A violent video of a cop slamming a female student to the ground and seemingly knocking her unconscious is raising serious questions about the level of force used here.

The video was shot Tuesday at Liberty High School in Osceola, Florida. You can see a young woman -- allegedly a student -- with her hands behind her back as a deputy slams her to the ground. There was a loud bang as the girl's head slammed to the concrete, and she appears to be immediately out cold.

It's unclear why the Osceola Sheriff's deputy was at the school or what led up to the deputy's involvement. The Sheriff's Dept. would only tell us the incident is under investigation.

One person who posted the video said, "This girl was already separated and under control by one of the faculty members when the officer came out of nowhere, picked her up and bodyslammed her headfirst on to the concert."

We've also reached out to Liberty High ... so far, no word back. 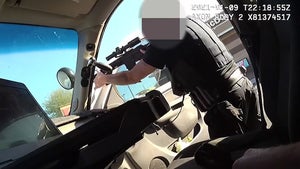