Alex Ovechkin's wallet is now $5,000 lighter ... the NHL just hit him with a fine after it says he "speared" a Boston player in the man junk during their game Wednesday night.

Ovi and Bruins winger Trent Frederic went after each other often during the Washington Capitals' tilt with Boston ... with Frederic even challenging the NHL legend to a fight at one point mid-game.

35-year-old Ovechkin declined the scrap ... but the drama didn't end there, 'cause later in the night in the 3rd period, Frederic tried to get under Ovi's skin once again.

The Bruins' 23-year-old stole a puck from Ovechkin and then cross-checked him with his stick several times.

The Caps superstar eventually had enough, and slashed the hell out of Frederic's groin!!!

Both players were hit with penalties for the incident ... each being forced to sit for 2 minutes.

The NHL clearly felt Ovi's penalty, though, needed more ... with the league slapping him with a fine Thursday morning, explaining the dollar amount was "the maximum allowable under the Collective Bargaining Agreement."

All in all, it was probably worth it for Ovechkin -- dude's made over $120 MILLION in his NHL career AND his team came out with the 2-1, shootout win. 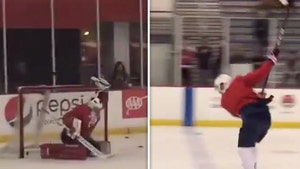 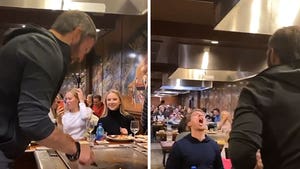