2:39 PM PT -- Scottsdale PD tells TMZ ... two women were criminally charged in connection to this incident, but wouldn't say which ones or what the charges were.

We're told a preliminary investigation shows the whole thing started because somebody cut in line, and SPD insists this had nothing to do with race or mask-wearing.

A brawl broke out at a Bath & Body Works in Arizona, where the employees of all people are the ones who stepped in ... and proceeded to whoop on a woman.

Check out this insane fight that broke out over the weekend at the Fashion Square Mall in Scottsdale -- where a middle-aged woman is said to have been causing a ruckus inside with another customer before s*** hit the fan.

The person who shot this claims the lady was standing too close to another customer and they started arguing ... something she says the workers tried deescalating.

At some point, somebody put hands on the other ... and all hell broke loose. You see an employee start to go at it with the blonde woman, while her co-worker rushes over to help ... knocking everyone over in the process. Not too far away, another woman gets into it with yet another worker.

Eventually, a male employee steps in to break it up -- and he orders the women who were fighting to get the heck out of their establishment. The blonde lady tells him to stop touching her, and then says she ain't leaving 'til she can get her purse amid the commotion. 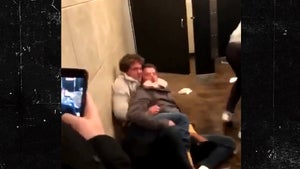 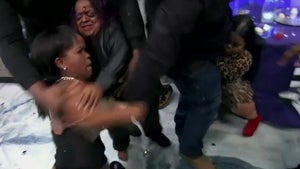