Kevan Miller was feeling VIOLENT on Tuesday -- the Boston Bruins player unleashed the fury all over multiple Buffalo Sabres players ... culminating with a KO in a mid-game fight!

The brutality began in the 2nd period when Miller came flying across the ice to smash Sabres' forward Rasmus Asplund into the boards at breakneck speed. Asplund went crumpling to the ground.

Asplund's teammates took issue with the shot because it looked like an illegal blindside hit -- even though it wasn't called for a penalty.

That's when Sabres' player Tage Thompson squared up with Miller looking to avenge Asplund ... but he quickly learned Miller was all about the smoke.

The gloves came off ... and Miller immediately opened up a can of whoop-ass all over Tage's face -- beating him down onto the ice in a one-sided mauling.

Eventually, the refs stepped in and put a stop to the fight when it became clear Thompson had no chance.

FYI, Miller is a very experienced fighter -- with 20 scraps under his belt since 2013.

Thompson, on the other hand, has only fought once in the NHL since joining the league a few years ago.

It's almost like Thompson didn't realize what he was getting himself into ...

As for the game, the Bruins ended up securing the "W" in an overtime shootout.

Bad night for Thompson and the Sabres. Ice that jaw, bro. 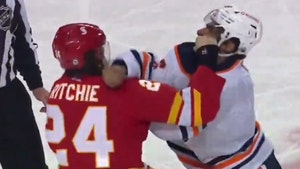 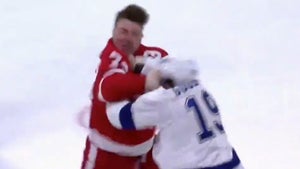 You Might Want to Rethink NHL Fights TMZ Sports