It's a beautiful day to move into the neighborhood Mr. Rogers called home ... or at least that should be the pitch to sell Fred Rogers' old crib in Pittsburgh.

The home where the late TV host once lived is for sale at a cool $855k ... and, boy is it rich with history. Fred and his wife, Joanne, lived there from the late 1950s until the early 1960s. In fact, the listing includes a birth announcement for the couple's youngest son, John -- the published article serving as proof they really did live there.

And, get this ... according to Pittsburgh Next, which first reported the listing, previous neighbors recalled how Mister Rogers would do puppet shows for the kiddos who lived in the neighborhood.

The house is 3,693 square feet ... featuring 5 bedrooms and 4 bathrooms, and was built in 1921. It also has 2 fireplaces and a pretty awesome library.

A neighbor says they were told Mister Rogers called the Pittsburgh house "his favorite" one. 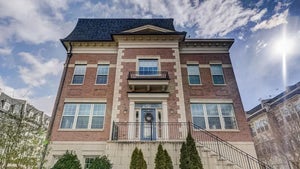