Deshaun Watson claims at least 5 of his accusers performed massage therapy on the QB after alleged sexual misconduct incidents ... and the NFL star believes it's proof the women are lying.

Watson just filed new court docs responding to the 22 female massage therapists who have filed lawsuits against him. And, now that he knows the identities of his accusers, he's going after them one by one.

"In the few days since Mr. Watson has learned the identity of his accusers, his legal team has already uncovered evidence that numerous allegations in this onslaught of cases are simply not true or accurate," Watson's attorney, Rusty Hardin, says in the court docs.

Hardin lays out 6 points which he believes will help to prove his client's innocence ...

--"After the massage therapy sessions with Mr. Watson, 8 plaintiffs bragged about, praised, and were excited about massaging Mr. Watson"

--"7 plaintiffs willingly worked or offered to work with Mr. Watson after their alleged incidents"

--"3 plaintiffs lied about the number of sessions they actually had with Mr. Watson"

--"3 plaintiffs lied about their alleged trauma and resulting harm"

--"5 plaintiffs told others they wanted to get money out of Mr. Watson"

--"5 plaintiffs have scrubbed or entirely deleted their social media accounts"

Hardin clearly believes any woman who would work with Watson after suffering such trauma during an alleged sexual misconduct incident is lying.

Hardin claims he has proof that 5 accusers "chose to work with Mr. Watson even after they claim he acted offensively and aggressively in prior sessions."

"This, of course, raises the question of why they would agree to follow-up therapy sessions when they claim their experiences made them feel like they 'wanted to vomit' and caused them to 'no longer accept massage clients, for fear of a repeat of this type of harassment.'”

As for Hardin's claim that some of the accusers are scrubbing their social media accounts, he believes they're doing it to rework their images.

Watson names four accusers and says, "Before their names became public, their accounts contained pictures that are inconsistent with the image they portray through their petitions."

Watson and his attorney are asking the courts to throw out the lawsuits against him and force the accusers to pay his court costs. 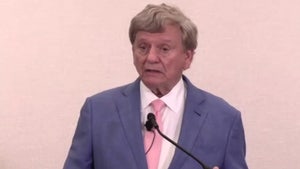