The play happened in the second inning of the first leg of the Sox's doubleheader with Kansas City ... when Dozier hit a pop-up just feet from home plate.

As the Royals 3rd baseman, though, put his head down to run to first ... Abreu came sprinting in with his eyes toward the baseball in the sky.

The two then crashed into each other ... knocking heads and shoulders -- before crumpling to the ground.

Scary moment as José Abreu and Hunter Dozier have a nasty collision, both needed help walking off the field pic.twitter.com/4rxBBd85Xa

You can see in the slow-mo footage from the dugout ... the collision was VIOLENT -- and the two laid on the infield in pain for several minutes.

Both players were eventually helped off the field and forced from the game. It's unclear if they've suffered any significant injuries from the collision.

Horrifying sight -- especially considering both dudes are huge parts of their teams' successes -- here's to hoping everyone's going to be OK. 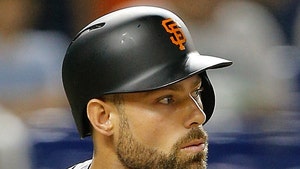