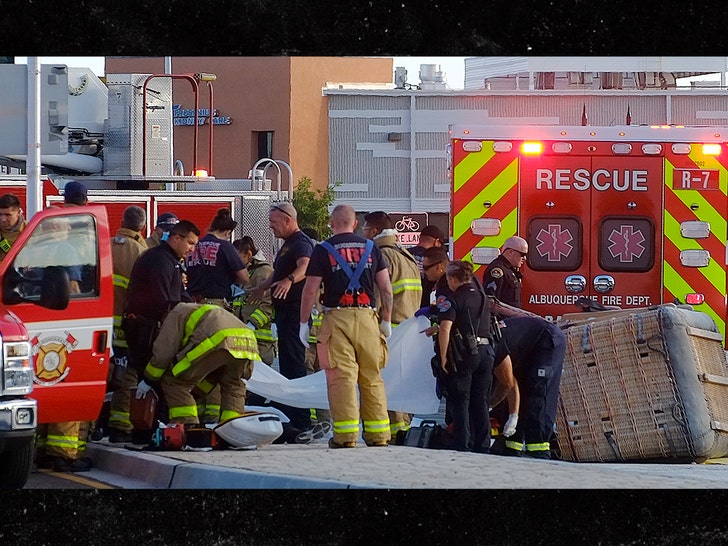 A hot-air balloon ride in New Mexico quickly turned into a deadly nightmare -- as the gondola that was carrying the riders snapped clean off ... and plummeted to the ground below, killing several.

This tragedy happened Saturday morning in Albuquerque, where at least 5 people were riding in a hot-air balloon above the city ... when, according to preliminary investigations, their basket carrier somehow detached from the balloon -- leaving them in a free fall descent.

Video of the hot air balloon crash in Albuquerque this morning from Brandon Banes. So far four people are dead and one is critically injured. pic.twitter.com/ZpuCz8qI1y

The balloon itself floated down after them -- crumpling under its own weight in the air -- which was captured on video by several different bystanders. Important to note -- the people are not seen falling in these clips ... presumably, they'd already hit the ground by this point.

Reports say the basket crashed into some power lines ... which sent the carrier up in flames, and caused an electrical outage in the area, not to mention a crazy crash scene in the road.

Four people are said to have died from the fall -- reportedly in the ages of 40-60 -- but one was transported to the hospital in critical condition ... and docs are working on saving them. Unclear, for now, what exactly went wrong up there for something like this to happen, but it's terrifying nonetheless.

There's also no word yet on whether this was a privately-owned hot-air balloon, or one that was owned by a company of some sort. Authorities are looking into all of that, we're sure.