The NBA season is over, but Trae Young is still doing ridiculous things on the hardwood ... here's the Hawks superstar hitting a game-winner in a pro-am match Monday that sent the arena into an absolute frenzy!!

The game -- part of Skinz League action in Oklahoma City -- was wild ... Trae was getting buckets, hitting 3-pointers from near the half-court logo and blowing by defenders with ease.

Highlight videos show the 22-year-old just went off ... yet, somehow, the dude's team found itself down 90-88 -- and facing some big-time smack talk.

But, in video Young posted late Monday night, you can see he let the chatter fuel him ... eventually hitting a dagger over the trash-talker with no time left on the clock to win the contest.

The shot created quite the scene, with dozens -- and maybe even hundreds -- of people leaving the stands to swarm Trae on the court!!

Don't worry ... Young escaped it all unharmed -- and you could see he was grinning ear to ear amid the chaos.

"When you talk that 💩," Trae said of the shot and the smack talk that preceded it, "just know you gotta back it up with me..! THIS FOR THE CITY❄️"

The game's ending was so sick, it drew the attention of LeBron James ... who commented on the video, "Straight Like That!!!"

For some reason, Young ain't on the Team USA Olympic roster this year ... but if that means we get more action like this from the young hooper -- we'll take that trade-off!! 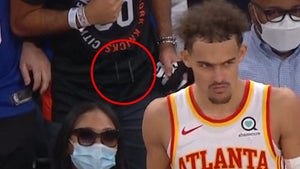 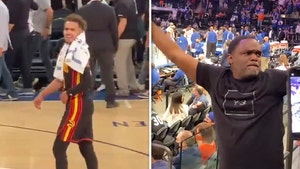