12:59 PM PT -- Bob Odenkirk says he suffered a heart attack when he collapsed on the set of "Better Call Saul" ... but he says he's going to come out of this OK thanks to a group of doctors in New Mexico.

Bob just shared an update on his health, saying he's recovering from a "small heart attack" and thanking doctors who he says knew how to fix the blockage without surgery.

I had a small heart attack. But I'm going to be ok thanks to Rosa Estrada and the doctors who knew how to fix the blockage without surgery.
Also, AMC and SONYs support and help throughout this has been next-level. I'm going to take a beat to recover but I'll be back soon.

Odenkirk says he's going to take some time off while he's on the mend, but he says he'll be back to work soon ... and he's thanking everyone who sent positive wishes his way, saying he could feel the overwhelming love and support.

Good news, folks ... Bob Odenkirk is in such good spirits he's now joking around with friends, according to one of them ... actor David Cross.

Cross says the "Breaking Bad" and "Better Call Saul" star is doing so good, in fact, fans will soon be hearing from him. Cross updated Bob's legion of fans Friday morning saying, "Just got off the phone with Bob and he's doing great!"

David added, "Both [Bob] and his family are overwhelmed with the outpouring of love and concern everyone has shown. You will be hearing from him soon. But he's doing really well!!!"

That's welcome news considering what he's gone through over the last couple of days. TMZ broke the story ... Bob was rushed to the hospital after collapsing on the set of "Better Call Saul" while filming in New Mexico.

We later learned the emergency was a "heart-related" incident. For a moment it was touch-and-go. He was not conscious during his initial hours in an Albuquerque hospital before he eventually woke up -- and Cross now sounds confident Bob will be back to his old self.

As we reported ... there was an outpouring of support following the medical scare. "Breaking Bad" star Bryan Cranston shared a pic on Instagram and asked fans to "please take a moment in your day today to think about him and send positive thoughts and prayers." 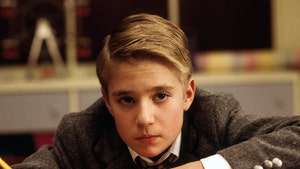