Kris Bryant cried and needed multiple hugs after learning he was being traded out of Chicago ... and video of his emotional departure from the Windy City will hit ya right in the feels.

The Cubs star was dealt to the S.F. Giants just minutes before Friday's MLB trade deadline ... and when he learned of the news via a phone call in the dugout, it ain't hard to see it hurt like hell.

Here's the moment Kris Bryant finds out he's been traded to @SFGiants.

It's OK to wipe away the tears. For all of us.@Cubs #GoCubsGo pic.twitter.com/PRrBWKYfV8

Bryant dapped up and hugged a Cubs staffer, and then began to tear up. And, when the waterworks began to flow heavily, he needed a second hug before leaving the dugout.

Of course, Chicago is all Bryant has known ... he was picked by the Cubbies in the first round of the 2013 MLB draft, and has been a star just about every day since.

The Cubs got minor leaguers in return for Bryant, who had a .267 batting average with 18 home runs in 93 games for Chicago this season. 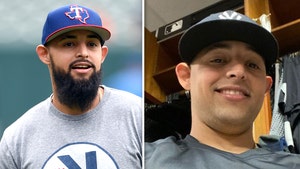