3:47 PM PT -- Egan's lawyer, Jack E. Buchanan, tells TMZ ... "Ms. Egan is a proud veteran of our military, a loving mother to her children, and a successful business owner. The preceding 21 years of her life prior to this incident have been void of any sort of contact with law enforcement or any participation or association with anything criminal in nature."

Buchanan adds, "As to date, no formal charges have been filed against her, and no official discovery has been turned over regarding this matter. Ms. Egan looks forward to addressing the allegations in a fair, criminal proceeding, where we are hopeful her name will be cleared and restored to the exemplary individual she is and who individuals closest to her will also unequivocally attest to."

Jenelle Evans' podcast cohost got booted from The Cosmo ... but she didn't leave without a fight ... cops say she tried kicking security and a cop in the nuts during her arrest.

This one's a doozy, so buckle up. According to a police report, obtained by TMZ, Gabrielle Egan -- who hosts the "Girl S***" podcast with Jenelle -- was arrested July 24 in Vegas for a trip that was supposed to be a celebration of her 3-year wedding anniversary.

Instead, cops say she became unruly while at the Marquee pool club ... yelling at patrons. It's unclear why she was screaming, but cops say security asked her to leave. She allegedly told security to "f*** off" before asking, "Why do I have to leave you f***ing bitch?"

When she refused to split ... cops say security detained her for trespassing, and cops say that's when Egan tried kicking the security guard in the testicles. The security guard was able to deflect the kick with his leg.

But, get this ... cops say while switching out the security guard's handcuffs, Egan also tried kicking the cop in the testicles. She missed, again ... instead hitting him in the knee.

It didn't end there. Police say she tried several times to break her grip from cops and run away. And, when a cop attempted to search her ... Egan allegedly head-butted the cop in the nose with the back of her head.

Cops say a struggle ensued and Egan went limp ... forcing cops to carry her into the car.

Egan also allegedly threatened the police ... saying things like "watch what would happen" if they weren't in uniform. She also threatened to stab one of the officers during her trip to jail.

She was booked with 2 counts of battery by prisoner on a first responder and interference with a public officer by threat. 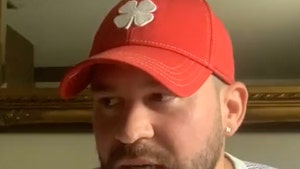