Here's a tip for anyone looking to call out Rosario Dawson -- ya better think twice, 'cause she will come for you ... and WHOOP YOUR ASS!!!

That's how it all played out on "AEW Dynamite" on Wednesday ... when the superstar actress showed up ringside to defend her fellow "Go-Big Show" judge, Cody Rhodes, from Malakai Black!!

Of course MB has been on a tear recently ... taking down Rhodes and a bunch of his crew (including his bro, Dustin) over the past few weeks.

RD clearly had enough of Black's run ... so she took matters into her own hands and confronted him outside the ring!!

.@CodyRhodes is here and it's WAR between the American Nightmare and #MalakaiBlack all over the @PruCenter!

Tune in NOW to watch #AEWDynamite LIVE on @tntdrama pic.twitter.com/Uq68BdN5Zz

But, Rhodes -- who wasn't expected to be at the event on Wednesday -- popped up out of NOWHERE and stormed down the crowd to help out ... and when Black turned his back, Rosario jumped on his back and started trying to choke him out!!

The scuffle lasted a few moments before Black was able to wiggle her off ... but the action didn't stop there -- he got in an all-out brawl with Rhodes in the stands!!

The whole incident sets up an insanely hyped rematch between Black and Rhodes, which will go down at Arthur Ashe Stadium next week.

Badass stuff as usual from Dawson ... and we definitely need to see more of this in the future!! 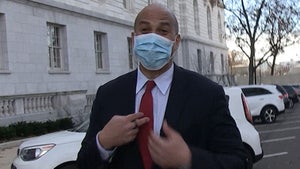 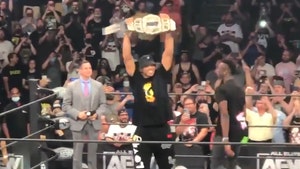