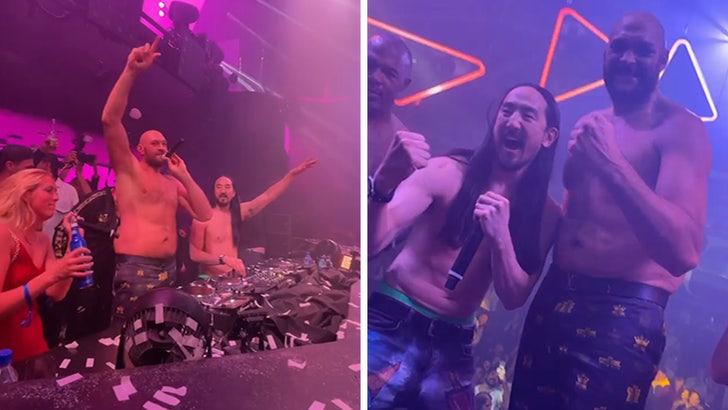 Tyson Fury just knocked out Deontay Wilder in the 11th round ... in what was one of the greatest heavyweight fights of all time! Which, of course, was followed by an epic after-party.

The fight was amazing ... 33-year-old Fury dropped 35-year-old Wilder in the 3rd round. Deontay beat the count ... and despite being on shaky legs, made it through the end of the round.

However, in the 4th ... the Bronze Bomber finally connected with a hard, straight right, sending Fury to the canvas. Tyson got up ... and Wilder pressed the issue, unloading a combination on Fury, again dropping him. The Gypsy King survived.

Deontay Wilder puts Fury down on the canvas TWICE.

The middle rounds mostly belonged to Fury ... as Wilder appeared to be the more tired man.

In the 10th, Fury connected with a heavy right that knocked down Deontay. Again, Wilder showing incredible heart, got up ... and actually ended the round with a flurry of punches, pinning Fury into the corner.

In the 11th, with Wilder down on the scorecards, Fury again landed a big right, sending Deontay to the canvas.

It was the third time the boxers faced each other in the ring. Their first fight was declared a draw. Fury KO'd Wilder in the rematch. And the third fight again belonged to Fury ... now the #1 heavyweight in the world, without question.

The fight was absolutely electric ... and both men displayed amazing will and determination.

As for the ring walks ... they were also extravagant.

The Las Vegas crowd was star-studded ... with everyone from Magic Johnson, Michael Strahan, Shaquille O'Neal and Vince Vaughn sitting ringside.

Social media was also buzzing ... with stars like LeBron James tweeting about the instant classic.

After the fight, Fury -- as is tradition for the Gypsy King -- belted out a rendition of "Walking In Memphis" ... remixed for Vegas.

Tyson also said he attempted to bury the hatchet with Wilder ... but claimed Deontay wouldn't shake his hand. Fury said he was going to pray for Wilder.

"I know you had your hearts in your mouth but don't ever doubt me when the chips are down!"

"I'll pray for Deontay Wilder."@Tyson_Fury has a message for his friends and family who might have got a bit stressed watching that epic fight! pic.twitter.com/DMoS9ps1RS

Massive respect to both fighters!! 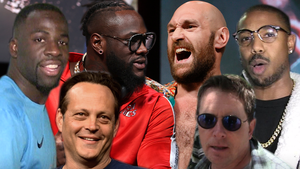 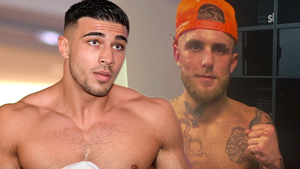 Tommy Fury Agrees To Fight Jake Paul, Vows To Put Him On A Stretcher