Celebrity dermatologist Dr. Alex Khadavi just got slapped with a restraining order in the latest fallout from his homophobic rant caught on video ... he's gotta stay away from the people who accused him of making death threats.

According to new legal docs ... the gay married couple who claim they were on the receiving end of Khadavi's threatening rant is getting court-ordered protection.

The docs, obtained by TMZ, show that Khadavi is banned from harassing, intimidating, attacking, striking, stalking, threatening, assaulting, hitting, abusing, destroying personal property or disturbing the peace of the couple, who live in his building.

Khadavi, whose celeb clients have included Lance Bass and Scott Disick, has also been ordered to stay at least 100 yards away from them anywhere outside of the West Hollywood condo building where they all live.

TMZ broke the story ... Khadavi's rant on July 7 was captured on video, which appears to show him approaching the front desk concierge in a hostile manner, talking smack about people who live in the building, referring to them with the homophobic f-word, and threatening to "blow their f***ing heads off."

The restraining order will be in place for the next 3 years, ending in October 2024.

We reached out to Khadavi ... so far, no word back. 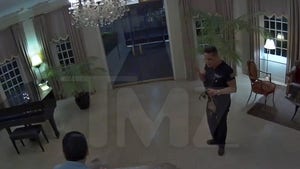 Celeb Dermatologist Being Investigated by Medical Board After Homophobic Rant