Former UFC fighter Brian Gassaway -- who fought MMA legend, Diego Sanchez, back in 2005 -- has died, his family and friends announced. He was just 49 years old.

A cause of death has not yet been revealed.

According to a GoFundMe set up in Gassaway's honor, the 29-20-2 brawler was just as good of an MMA coach as he was a fighter -- with his family and friends calling him a legend in the combat sports world.

"Brian's selfless pursuit of improving the lives of his students through the study of martial arts was apparent to all," the statement read. "He gave his students purpose, pulling many up during their darkest moments. Being the light that showed them the path forward."

Gassaway fought for all kinds of promotions in over a decade as a pro -- including Bellator, WEC and King of the Cage in addition to UFC.

He's best known for his tilt against Sanchez at UFC 54 -- a fight that he lost by a 2nd-round TKO.

"He lived his life with purpose and goodness, dedicating every waking moment to being a better person, husband, friend, fighter and coach," Gassaway's family and friends said.

"And, at the same time, he elevated the lives of all the people around him."

Gassaway leaves behind a wife and son. 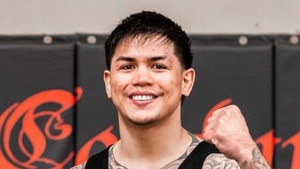