A horrifying video has surfaced, showing the chaos at the Astroworld festival had emergency workers so overtaxed, they tried taking one of the victims out on a stretcher but dropped her on her head.

The video shows a security guard, a police officer and another person carrying a woman on a stretcher to an elevated ledge ... in an attempt to bring her down onto a street where go-carts were waiting to take victims to a medical tent on the premises.

Three rescuers positioned themselves at one end of the stretcher ... near her feet. The 3 men were asking people around them to help bring the woman down off the ledge.

A passerby jumped in to help, but instead of grabbing the other end of the stretcher near the woman's head, he grabbed the area by her feet.

this hurts to watch... It makes me sick to my stomach. Travis Scott is SICK pic.twitter.com/CgaAPHapBT

So, all 4 men were on one end of the stretcher and no one was on the other end. When they dragged the stretcher off the ledge, the woman's head violently drops and hits a metal grate below.

The men then put the woman on one of the go-carts and it drives to the medical tent.

We don't know her condition ... but it looks extremely serious.

As we reported, 8 people are known to have died during Friday's concert. Hundreds were injured after a stampede during Travis Scott's performance.

Travis Scott shared his condolences and devastation on Instagram, he said he is working with Houston PD to identify families of victims. 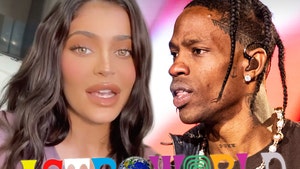 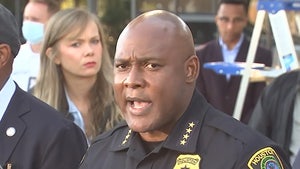