The calls for Justin Bieber to scrap his Saudi Arabia performance appear to have fallen on deaf ears -- because the guy just went through with it ... this despite mounting criticism.

Bieber just hit the stage Sunday all the way over at the Jeddah Corniche Circuit in SA, where the F1 Grand Prix is taking place ... and where he was scheduled to headline among a slate of other performers, with his name by far being the biggest.

Sources tell us JB was hired by F1 to do the event, but he wasn't the only act to perform ... David Guetta, Tiesto and A$AP Rocky all had shows -- and Lewis Hamilton won the race.

JB seemed pretty pumped for the performance ... with videos of him backstage surfacing online. Looks like he was shaking off some pre-show jitters, as you can hear the roar of the crowd just beyond the curtain.

Eventually, he made his way out to adoring fans, pointing at them for the grand entrance ... with at least one cameraman in tow. He was rocking a red outfit, apparently a jersey of some sort.

After that, he ran through a number of his songs ... including "Deserve You," "Somebody," "Hold On" and more. Unclear how long his set ran -- but it's pretty obvious the spectators were satisfied with the performance ... as Bieber seemed to give it everything he had.

BTW, he doesn't appear to have taken this long trip solo -- there's video of him and his wife, Hailey, moseying around on Saturday ... a day before showtime. Hailey was masked up and wearing a hat, seemingly trying to go incognito ... while JB just bared his face in full.

Of course, Justin's decision to carry on with the gig is disheartening to many -- especially those who were actively campaigning for him to nix the whole thing altogether ... including the widowed fiancee of one Jamal Khashoggi, who wrote an open letter for him to reconsider.

For his part, Bieber hasn't really been publicizing his appearance here -- but, clearly, he did what he'd been hired to do. Gotta wonder if he'll address this once he's back home. 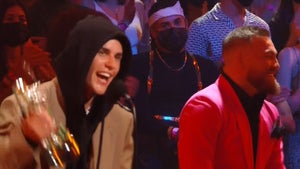 Justin Bieber Hypes Up Conor McGregor At VMAs, 'Gonna Get 'Em Next Time' 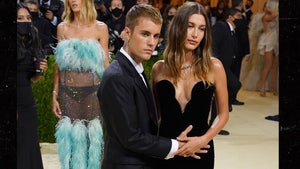