Pham, who admitted to reporters in an interview on Saturday he purposely went after Pederson, received the three-game ban for "inappropriate conduct" and was hit with an undisclosed fine.

Tommy Pham says he won’t play until the Boston series. He said it goes back with Joc Pederson to something Pederson said in a group text about Pham’s former team. pic.twitter.com/zFoirRDIXO

The incident went down on Friday as the Reds and Giants were preparing to start their series -- Pham approached and slapped Pederson over a dispute stemming from a fantasy football league.

In the video of the alleged incident circulating on social media, Pham appears to walk up to Joc and slap him in the face.

The Giants outfielder spoke candidly about the encounter with Pham after the Reds' 5-1 victory over his club ... saying the whole thing stemmed from Pham accusing him of cheating in the fantasy league they're in together (you can't make this stuff up).

Pederson said the dustup was the first time Pham ran into him ... and claims there was no argument between the two before the slap occurred.

Joc shares details of what happened in his fantasy football league that started his altercation with Tommy Pham today pic.twitter.com/d9NBTwPVoG

Giants skipper Gabe Kapler -- who announced Friday his decision to skip the national anthem moving forward due to the current state of the country -- refused to comment on the situation between Pham and Pederson.

Pham's suspension is retroactive ... meaning since he already missed Friday night's game after being scratched from the lineup, he only has to miss the next two games against the Giants. 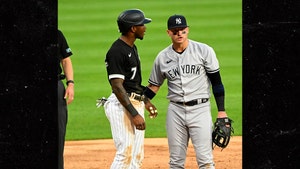