11:32 AM PT -- Broner's opponent is responding to his reason for pulling out of the fight ... and he's not buying it.

"What really passes (sic) me off is that now this mf wants to use #MentalHealth as a fkn excuse," Figueroa -- who has been diagnosed with depression, ADHD, bipolar disorder, and PTSD -- said minutes ago in a tweet. "That I have 'a problem' w because that's BS! You don't get to cry #MentalHealth now, mf!"

Omar says he believes Broner's real excuse is he didn't prepare for the fight ... and calls for the boxer to provide proof he's seeking professional help for his mental health.

"You don't get to undermine mine and countless other's (sic) journey and struggles w #MentalHealth because of your undisciplined/childish dumb ass!"

Adrien Broner hasn't fought in a year-and-a-half -- a streak that was supposed to come to an end this Saturday -- but the 4-weight class world champ just announced he's struggling with his mental health, and is pulling out of the fight.

33-year-old Broner was scheduled to box 32-year-old Omar Figueroa Jr. on August 20 at the Hard Rock in Hollywood, FL. ... but early Monday morning, AB let the world know the fight's off.

"Man, I'm going thru a lot at this moment in my life but I ain't go give up I set some more goals and UI ain't stopping until I finish what I started but sorry to say this but I'm not fighting #August20th," Broner wrote.

Just hours before AB made the announcement, he was still promoting his Showtime fight on Instagram. But, early Monday morning, he decided to announce he was pulling out because he wasn't feeling full-strength ... and the boxing ring isn't a place for play.

"Sorry to all my fans but #MentalHealth is real and I’m not about to play inside the ring I’ve watched a lot of people die playing with they boxing career and that is something I won’t do just pray for me I love the sport of boxing to much to not give my all and I feel Like I came up short before because my mind wasn’t 100%," Adrien wrote.

Broner says he needs to change some stuff in his life before he takes another boxing match.

"I need to make some changes for the better instead of worrying about other people feelings and pleasing them when In all reality I have nothing to prove to nobody," AB wrote, adding, "I have to step back and overcome this obstacle before I go put my life on the line inside the square circle again I know I’m far from being finished with the sport SEE YALL SOON #Respectfully❤️ 🆎"

Unfortunately, this is the 2nd time AB and Figueroa -- a former lightweight champ with only 2 losses -- were supposed to fight ... before the bout was canceled. In 2018, Omar was forced to pull out with an injury.

As for Saturday's event ... we're told execs are working on finding a new opponent for Figueroa Jr., and with just a few days to work with, there's a good chance it'll be another fighter from the card. 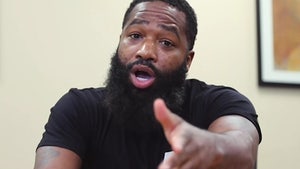 Adrien Broner Questions Floyd Mayweather, Why Haven't We Boxed Yet?! 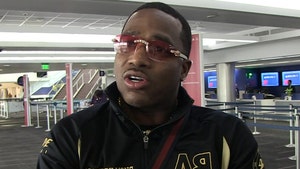