A Manny Machado fan pummeled a Dodgers supporter in a wild fistfight at the Padres game on Wednesday night -- connecting with haymakers over and over again.

The scrap went down at some point during L.A.'s 1-0 win at Petco Park -- when two rival fans started throwing hands at each other after getting into some sort of disagreement in the stands in right field.

Video from the scene shows the Dodgers fan got the worse end of the deal almost immediately -- getting rocked with a huge right hand at the start.

Fight from last night between Padres and doyer fans pic.twitter.com/wB2cURsWpr

The Padres fan didn't let up ... and appeared to tag the guy in the face with a few more strikes.

Eventually, the Dodgers fan was able to turn the tilt into a wrestling match ... before a bunch of other L.A. fans raced in to break up the altercation.

The man appeared to have some injuries to his face -- after the fight, he rubbed his eye area repeatedly.

No word if the SD fan had any ailments.

The footage appears to show a cop at the scene. We've reached out to the San Diego Police Dept. for comment on it all -- but so far, we haven't heard back yet. 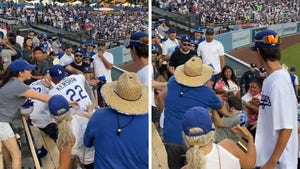 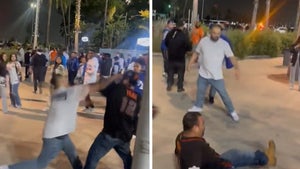