10:18 AM PT -- Video of Kyrie Irving approaching the fans has made its way to social media ... showing they had what appeared to be a friendly mid-game interaction.

Kyrie telling the Jewish fans in 'Fight Antisemitism" shirts that he's grateful for them pic.twitter.com/PCW1ZABhV8

The fans respond by saying, "thank you."

Several fans had a strong message for the Brooklyn Nets amid Kyrie Irving's backlash for posting about an antisemitic movie on social media -- donning yarmulkes and "fight antisemitism" shirts while sitting courtside at the game.

The group sat near the Indiana bench during the Pacers vs. Nets matchup in Brooklyn ... and Kyrie reportedly acknowledged them by making a thumbs-up gesture.

One of the fans claims Irving spoke to them during the contest ... saying he was "grateful for you guys," although they felt it was in a sarcastic tone, according to the New York Post.

The fan said the shirts were a message for the Nets ... adding the team should cut ties with Irving.

The move comes on the heels of Kyrie's decision to tweet out a link to "Hebrews to Negroes: Wake Up Black America," a movie that has been accused of being filled with stereotypes and tropes.

Kyrie defended the move ... saying he "meant no disrespect to anyone’s religious beliefs."

"The 'Anti-Semitic' label that is being pushed on me is not justified and does not reflect the reality or truth I live in everyday," he added. "I embrace and want to learn from all walks of life and religions."

Joe Tsai -- the owner of the Nets -- spoke out against Irving's post ... saying he was disappointed in the superstar's decision to share the project.

Tsai also said he wanted to meet with Irving to help him understand why his actions were hurtful.

Kanye West -- who is also facing his own backlash -- commented on Kyrie's actions ... calling him a "real one."

He did not speak with the media after the contest. 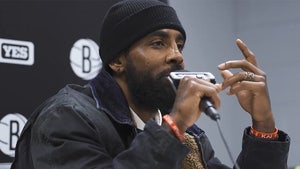 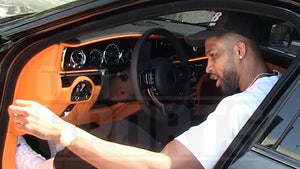