Washington Commanders star Brian Robinson's big hat resulted in some BIG sales for the company behind the massive lid ... 'cause TMZ Sports is told their business saw a whopping 2,000% increase in orders!!

Robinson's hat quickly went viral after Sunday's 19-13 win over the Atlanta Falcons ... and the running back hilariously told reporters -- "If you want a big hat, let me know."

Brian Robinson said his friend has a “big hat” company. “If you want a big hat, let me know.” pic.twitter.com/KXm3GCJWO1

Noggin Boss -- the company that sells big hats starting at $75 -- tells us the impact was immediate ... with Monday being one of the biggest days in the brand's history.

As it turns out, NB says a bunch of major television networks hit them up to get Noggins for their on-air talent following Robinson's appearance ... but ESPN's Scott Van Pelt was one of the lucky ones who got one "years ago" -- and he wore it on "SportsCenter" Monday night!!

Here is a video of SVP rockin it pic.twitter.com/J96U7flyqe

If the look seems familiar, Noggin Boss co-founders Gabe Cooper and Sean Starner appeared on "Shark Tank" earlier this year. The guys were seeking $50k for 25% of the company ... and ended up sealing the deal with Daymond John for 30%!!

Robinson's hat -- customized with the Commanders' logo -- was a gift from a family friend ... and the dude almost certainly started a trend in the sports world, with teams even photoshopping big hats onto their players.

NB tells us there's no official partnership with Brian ... but there are some "pretty huge" endorsement deals in the works. 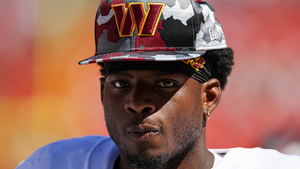 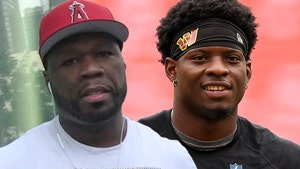