Kanye West's 2019 gospel album "Jesus Is King" made Billboard history several times over -- but gospel music legend Marvin Sapp is sympathetic to other artists who, he says, fell victim to Ye's immense celebrity!!!

Marvin thinks gospel music is far too welcoming ... something he lamented with VladTV, saying the genre jumps to include artists in its ranks just because they happen to make a song or 2 about God.

"Jesus Is King" became the first album to top the Billboard 200, R&B/Hip-Hop, Rap, Christian and Gospel albums charts at the same time ... and many artists saw their efforts totally erased from memory upon its release.

Marvin released his fifteenth studio album "Substance" back in June ... and as you can probably guess, it didn't get anywhere near the amount of attention as "Jesus Is King."

If he followed the Ye handbook -- which he clearly won't -- he'd consider a presidential campaign to boost sales! 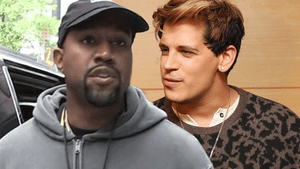