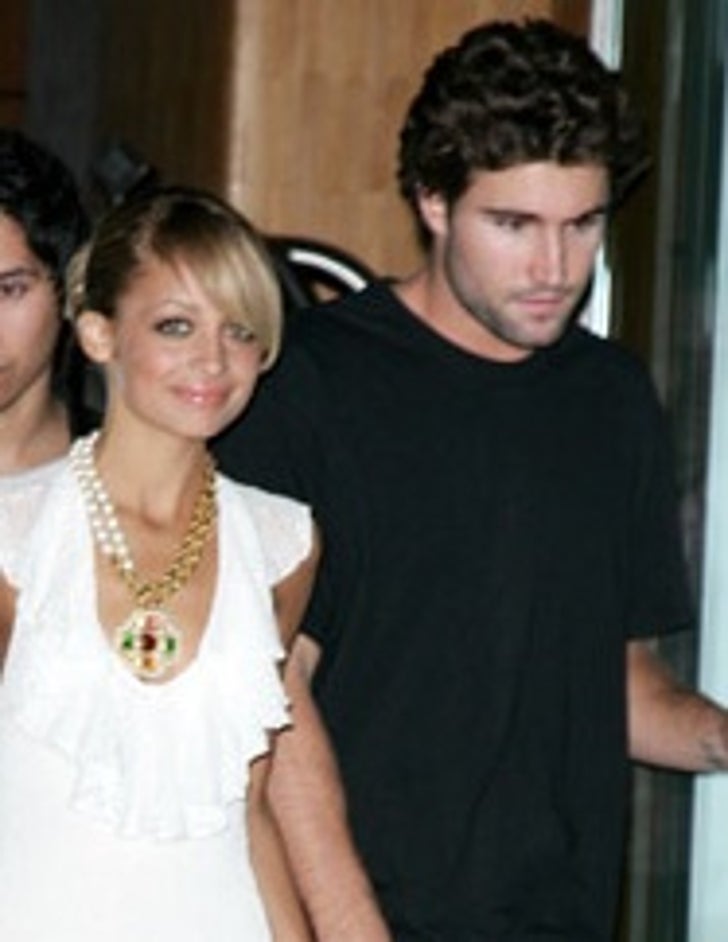 After two months of trying to elevate their longtime friendship to something resembling a relationship, Nicole Richie and Brody Jenner have called it quits, but say that they're remaining "close friends." According to Us Weekly, Richie initiated the break-up at Jenner's home in Malibu, and the reality-TV pair – known mainly for being the children of Lionel Richie and Olympian Bruce Jenner – decided mutually to go it alone.

"[Nicole] felt it was a mistake to jump into a relationship so soon after her breakup with [ex-boyfriend Adam 'DJ AM' Goldstein]." Of course, according to her MySpace blog, as PerezHilton.com ponts out, Nicole already appears to have a somewhat slender recollection of her time with childhood friend Jenner: "I know there are rumors regarding my 'breakup' with Brody Jenner. The truth is, we were never really together ... my heart was never in it. Anything further is just a cry for publicity." Ouch.

Something's in the air, clearly: Just yesterday, it became public that "The Break-Up" co-stars Jennifer Aniston and Vince Vaughn had also split.

The original diva, Barbra Streisand, began her first tour in 12 years last night with a show that highlighted some of her beloved hits – and took aim at one of Babs' favorite targets, President George W. Bush. Streisand, playing before a capacity crowd of 16,000 at Philadelphia's Wachovia Center, took on the President with a skit that features a fake Bush uttering such lines as "I'm concerned about the national debt, so I'm selling Canada," and "If I cared about the polls I would have run for president of Poland." Now that, friends, is acidic political satire.

Babs also had to use a teleprompter to remember the words to her own songs, saying that she had been so unnerved when she flubbed the words to three songs at a 1967 concert in New York that she stopped giving live concerts for over 20 years.

So he wasn't hunting for coconuts, and he didn't really fall out of a tree while climbing it. Rolling Stone Keith Richards sets the record straight about his fall from a tree in Rolling Stone magazine – and he thinks it's "embarrassing." Just to clarify the situation once and for all, Keith says, "I was sitting on this gnarled shrub about six feet of the ground. I was wet – I'd been swimming. I hit the ground the wrong way, my head hit the trunk, and that was that." Keith, God bless, but we still don't have any idea what you're talking about. Still, Richards had to have emergency head surgery – and face scads of public ridicule – following the incident. He's recovered from the accident.

Mop-topped "American Idol" runner-up Clay Aiken continues to do his best to evade questions about his sexuality. Rush & Molloy caught up with the singer at a performance of "Hairspray" starring his former "Idol" colleague Diana DeGarmo, and asked him the big question. They took a different tack – asking his thoughts about a recent warning from no less an authority on unveiling one's gayness than Elton John, who said that Clay will keep getting the same question until he addresses it. "I have no idea what you're talking about," he said, before taking off with the female members of his family.

Lower Manhattan's most famous resident, Robert De Niro, has finally found a place uptown – for a cool $23 million. The actor and his wife Grace Hightower, according to the New York Post's Braden Keil, bought their Upper West Side duplex, after a long search, from the ex-wife of film mogul Harvey Weinstein. Their new place has a projection room, not to mention five bedrooms and 6 ½ baths ... The world's most photographed pregnant woman, Maggie Gyllenhaal, and fiancé Peter Sarsgaard had their first child Tuesday afternoon, a baby girl named Ramona, reports People. "Everyone is healthy and happy," says Maggie's rep ... Much-anticipated ABC comedy "Knights of Prosperity" – the one where a bunch of guys try to rob Mick Jagger – has been delayed from its Oct. 17 premiere to give the network more time to give the show a better promotional push.