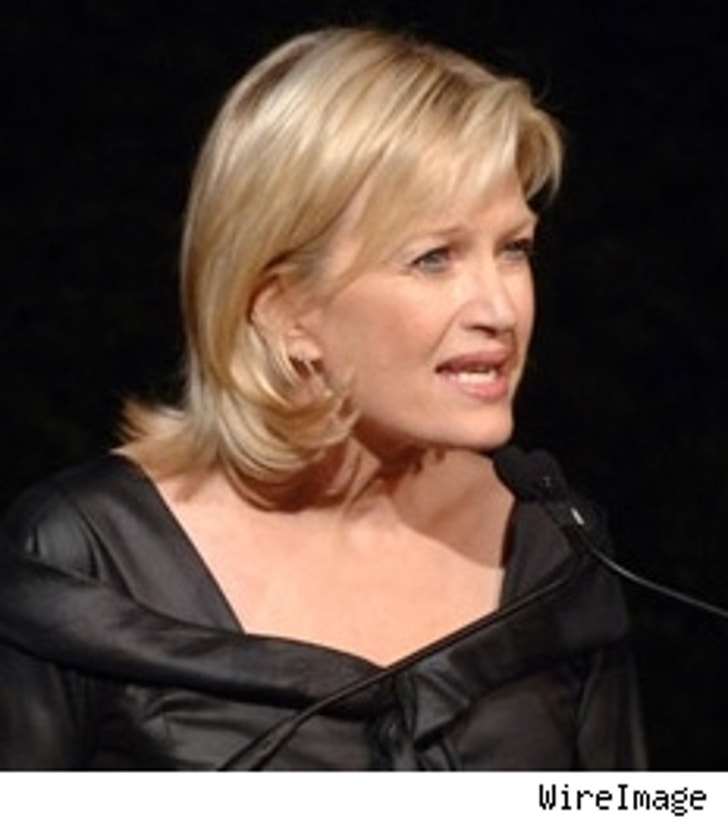 Diane Sawyer skipped out on a party thrown for Chris Cuomo, Sam Champion and other "Good Morning America" staffers last Friday -- and a source says that it's a sure sign that the news diva is planning on leaving the show soon.

Just as the competition heats up with "Today" after Meredith Vieira's arrival, a Sawyer sayonara could be a difficult blow to the ABC morning property. "The staff took Diane's absence as a clear message she is leaving the show," says a source to Rush & Molloy, "and is slowly starting to separate herself from it." Sawyer, say the columnists, had just arrived from interviewing Mel Gibson in his first post-DUI sit-down.

But an ABC rep dismisses any notion of Diane leaving: "She was sick in bed. She called [ABC News chief] David Westin and ['GMA' producer] Jim Murphy to see if she should still come. They urged her stay home."

It's Humor, Folks: Stewart, Colbert, Williams Not Running for Prez

So what do Jon Stewart, Stephen Colbert and Robin Williams all have in common? They're not running for president, and never will. All three funnymen made it clear over the weekend in New York that despite their fans' -- and their fictional counterparts' -- actions to the contrary, none of them have any desire to actually be the president.

Stewart, at the New Yorker Festival, told an audience that the fact that people are even trying to promote him and his partner-in-fake-news Colbert as a team is "a real sign of how sad people are" with their government. And he adds that, though studies show otherwise, "There's no way you could get the news from ["The Daily Show"]. I've seen the show. It couldn't happen."

Meanwhile, Robin Williams said that there's a reason he'd never run for office like his character in the upcoming "Man of the Year": "I make Bill Clinton look Amish."

Actress Robin Givens hadn't really thought about writing her life story -- until Oprah Winfrey decided she should do it. "I was in Florida and I got a call from her," Givens tells Jawn Murray of AOL Black Voices' BV Buzz. And what did O have to say? "People need to know your story and you're coming on the show." And just like that, there was a crew from the show at Givens' house, Givens did Oprah's show, and then Oprah suggested she write her story down for posterity -- which Givens says she's doing sans ghostwriters. The book will be out early next year; currently, the 42-year-old former "Head of the Class" star (and ex-bride of Mike Tyson) is touring in the play "Men, Money and Gold Diggers."

Well, even if her brother ain't exactly flush with cash, Janet Jackson is doing something right. A report in Upscale magazine (via MSNBC) says that the pop queen is looking up and down in Manhattan for apartments that cost as much as $30 million.

She and longtime boyfriend Jermaine Dupri scoped out a 9,000-square-foot place in Manhattan's Columbus Circle, home to some of NYC's priciest real estate. Wherever they end up, they're going to need to have big closets: "Jermaine could take the bigger one. He has way more shoes than I do and I'm a shoe whore!"

Scarlett Johansson tells the new issue of Allure magazine (via Us Weekly) that she's not "promiscuous," but that she's not a "serial monogamist" either. "I do think on some basic level we are animals," says the starlet, who's dating Josh Hartnett, "and by instinct we kind of breed accordingly" ... Ellen Barkin is splitting up with makeup mogul Ronald Perelman, and, according to Page Six, all her jewelry from their six-year marriage is going to be auctioned off at Christie's. The haul should bring in $15 million, though it's not clear how much of that Barkin will get ... And the whole kerfuffle over drug tablets in his bags at a French airport is a whole lot of French hooey, says Jimmy Buffett. On his blog, as Page Six notes, the "Margaritaville" singer says he "couldn't tell the difference between a hit of ecstasy and Excedrin PM." But Buffett just wanted to get out of there, so he paid his fine and walked away.