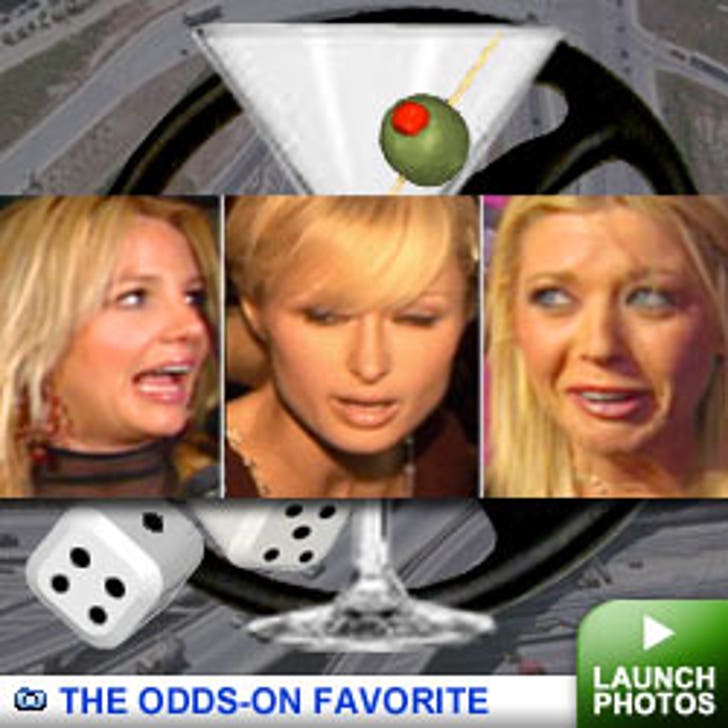 While Britney Spears may be partying and undressing like Paris Hilton, the question is: Will she be following in her alcohol-soaked, law-breaking footsteps?

On the heels of DUIs by Hilton and Nicole Richie, wagerweb.com has released their picks for which member of the A-list party crowd is most likely to wind up busted behind the wheel. These stars can run but they can not Hyde.

Not surprisingly, Britney tops the list with a 1 to 2 chance that she'll be arrested and charged with a DUI. Paris, who was busted early this year, could be a repeat offender and so she lands the #2 spot. Good-time train wreck Tara Reid may be trying to clean up her image, but it's not enough to keep her from sloshing into the #3 spot on the list. Keeping her out of clubs might keep her out of jail.

Despite her wreck-a-week driving skills and AA membership, Lindsay Lohan hiccups into #4. Wait until she's of age! Rounding out the top 5: Limoncello aficionado, Danny DeVito.

Other celebs getting a lot of buzz and making the list include Ashlee Simpson, Mary-Kate Olsen and Malibu's most wanted, Mel Gibson. Cheers!