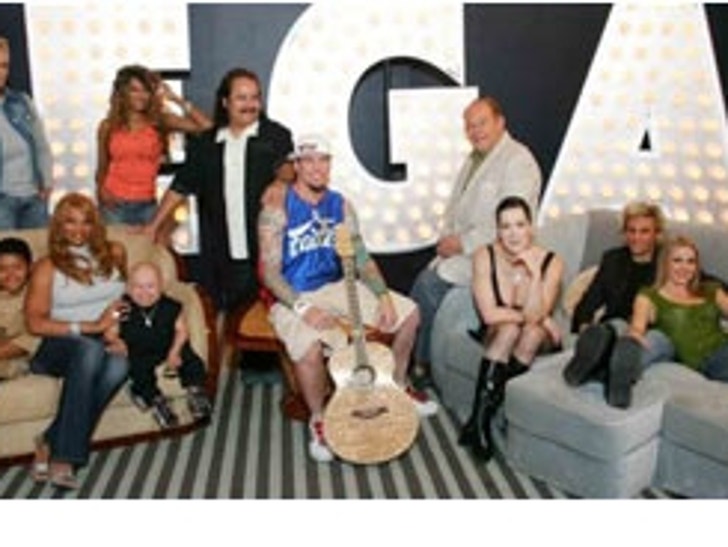 VH1 has expanded their "Surreal Life" franchise by adding a new game show, "The Surreal Life Fame Games," that premiered this past Sunday. The show pits celebrities in various contests, including Vanilla Ice, Poison's C.C. Deville, Pepa and Joanie "Chyna Doll" Laurer. If the opening episode is any indication, we'll see plenty of "reality" as the series unfolds.

Indeed, within a few hours of filming the very first episode, things got real for former New Kid on the Block, Jordan Knight. Knight received a call saying his grandmother died. He told cast members he had to leave, and before the first show was in the can -- he was gone. Rumors swirled on the web that Jordan simply wanted out, but one cast member tells TMZ that they believe the call was legit.

Another thing that was apparently real were those tears shed by Chyna after losing the first celebrity contest. Week one saw cast members compete to see which star would get asked for the most photographs by an assemblage of audience members. Vanilla Ice actually managed to win the round. Poor Chyna only got one photo seeker and the tears welled ... then flowed. It was cute seeing her being consoled afterwards by fellow contestant Ron Jeremy.

Speaking of the big guy; Jeremy has at least one familiar friendly face in the cast; he and C.C. Deville are longtime buddies. They once created their own real-life surreal moment when Deville brought Ron to his house to meet his parents. Jeremy really is an accomplished pianist and played some tunes while CC and his dad sang along. Yes, CC, known for his guitar playing, is a bit of a "singer" himself. You'll get to hear him in next week's episode, singing the new theme song he wrote, appropriately titled: "I Want to Be Famous." Speaking of real life, Deville says he's looking forward to fatherhood. He'll have some extra fun with his soon-to-be newborn, as he's been learning magic for a new pilot called "Magic with the Stars."

He says he doesn't pull any tricks on this show. As the weeks unfold, you might see the rocker's softer side. As for other cast members, you might see some real anger. Some of these folks still take themselves seriously, even while appearing on this kind of show. What's a celeb reality show without anger and the gratuitous hookups? While week one saw Chyna relegated to the B List, she's bound to get some more press (either good or bad) for a hint of some lesbian liplocking between the former wrestler and Brigitte Nielsen -- now that is surreal!