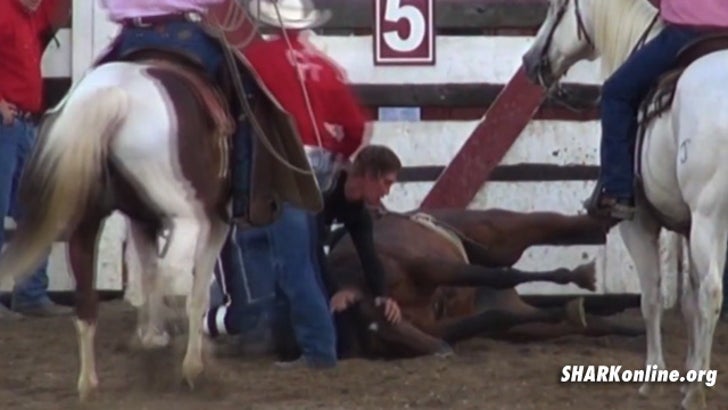 Tragedy struck at the famous Cowtown Rodeo in New Jersey this weekend when one of the horses died during a live performance ... and animal rights activists say there's evidence the horse was electrocuted.

The rodeo -- which has been running since 1929 -- came to a screeching halt when a 9-year-old horse named Duke came bucking out of the gate Saturday ... only to collapse after experiencing what appeared to be a seizure.

After the horse went down, staffers raced to its side as Duke died in front of the live crowd. Duke was eventually carted away.

After the incident, the animal rights group SHARK -- SHowing Animals Respect and Kindness -- says one of its members was in attendance and witnessed Duke being secretly shocked by an electric device right before he was released from the gate in order to get Duke to buck more wildly.

The SHARK member shot footage of the incident -- which shows someone holding a "Hot shot" electric prod in Duke's holding gate.

Cowtown insists Duke's death was as natural as it gets due to an "aneurysm of his aorta blood vessel."

The rodeo explains, "Our vet has assured us that this had nothing to do with the rodeo event and it is a natural (although rare) occurance to have a horse pass from this reason."

However, when we called Cowtown owner Grant Harris -- who also owned Duke -- he told us the device in Duke's pen DID appear to be a "hot shot" ... but says everyone at the rodeo is under strict orders to NEVER use the prod on a horse.

Harris notes that in the video ... the device does not appear to ever touch Duke.

Harris tells TMZ he raised Duke from birth and says he loved the animal ... adding, "I am going to be talking to everybody who's been in contact with the horse to find out if Duke was mistreated."

For its part, SHARK says it will be contacting the SPCA to demand animal cruelty charges be brought up against Cowtown. 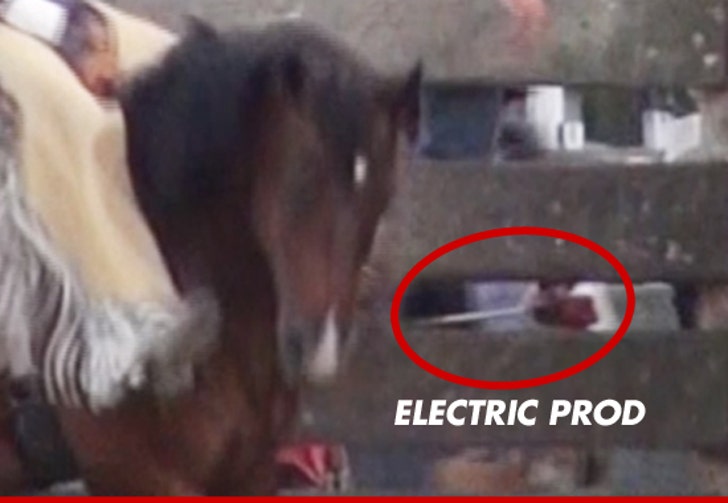