The sharks BETTER THINK TWICE before getting back on the 405 freeway ... 'cause Tara Reid tells TMZ she's totally down for ANOTHER installment of "Sharknado."

Reid just called in to "TMZ Live" ... and told us she's blown away by all of the fanfare following last night's premiere of the SyFy flick.

"I'm just so glad that people saw the humor in it that I did ... because it's hilarious."

She adds, "This movie was so ridiculous, you know? Like it's almost so bad that it's good."

Tara says she's down to fight even more sharks if SyFy greenlights a sequel ... but it's clear, she's way more fired up about the Sharknado DRINKING GAME!" 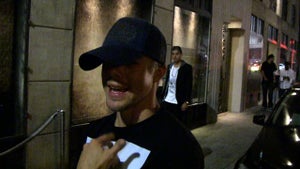