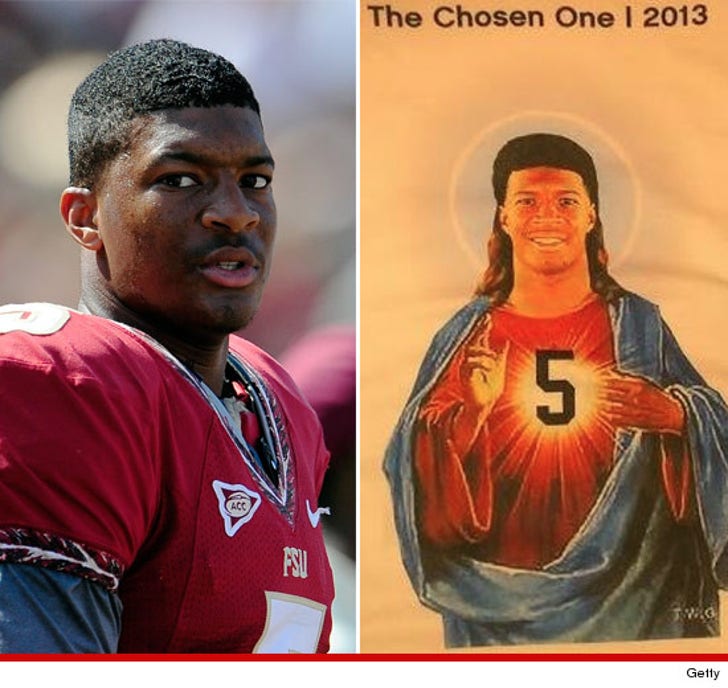 Shades of Tim Tebow on the campus of Florida State -- where someone is making major coin off t-shirts depicting FSU QB Jameis Winston as Jesus Christ, and the university is trying to shut it down ... TMZ has learned.

If you hadn't heard ... Winston's become a Heisman frontrunner, scoring 6 TDs in just 2 games (that's a lot) -- and an enterprising FSU fan decided to cash in.

But a high-ranking source inside FSU's Athletic Department tells us they've fired off a cease and desist letter to the fan ... out of concern sale of the shirts could get Winston and FSU in trouble.

We're told the NCAA could punish FSU if it feels the school isn't doing enough to prevent someone from profiting off a player's image -- a right which is reserved for NCAA universities.

The other issue, according to our source, is a lot of people on the Tallahassee campus just think the shirts are sacrilegious.

For his part, the fan says he'll be hawking the tees again during today's home game.

By the way, Winston's connected on 40 of 45 passes this year -- an astounding 88.9% completion rate! Pretty damn heavenly, if you're a Seminoles fan.