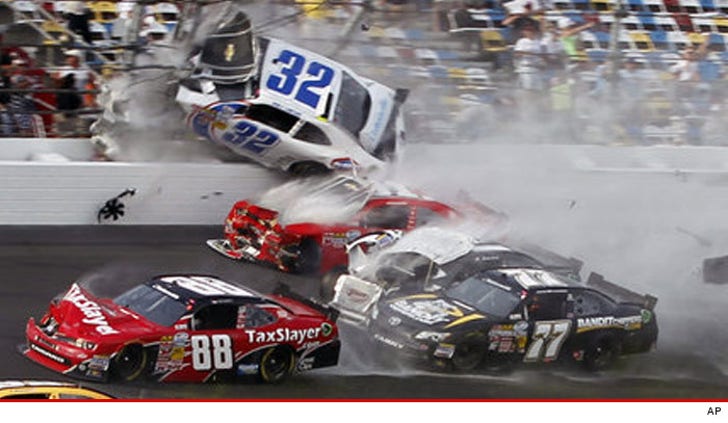 A woman who was injured in a nasty 2013 Nationwide crash at Daytona is trying to hammer out a settlement with NASCAR ... claiming her body and her career were wrecked as a result of the freak accident.

The crash occurred in February 2013 -- when Kyle Larson's #32 car was smashed into a wall and pieces of the vehicle went rocketing into the stands, injuring several spectators including Whitney Turner.

The race went on ... but Whitney's attorney Matt Morgan tells TMZ Sports her life has been a disaster ever since.

"[She's] been living on her back since the date of the Nationwide crash. She has had multiple surgical procedures performed to repair her severed Achilles' tendon and internally deranged knee."

Morgan continues, "Whitney has lost her job as a marketing specialist and is struggling to support her young daughter."

As a result, Whitney has threatened to sue the International Speedway Corporation and NASCAR claiming they're to blame for her condition.

But before she files the suit, Whitney's lawyer says the parties will gather 'round a negotiating table to try and work out a deal to "amicably resolve their claims."