A terrified Sandra Bullock feared for her life as she came face-to-face with her alleged stalker ... and an L.A. courtroom heard it all unfold Thursday as prosecutors played the disturbing 911 audio in court.

A judge heard the frantic call Bullock made to police as she hid in her closet from the man she claims stalked her and broke into her home. During the call, Sandra says she saw "the guy go upstairs into my attic."

A clearly terrified Sandra wonders how long it will be before officers arrive ... asking the operator, "Are they close?"

As we previously reported ... in June 2014, Joshua Corbett was charged with forcing his way into Bullock's house while she was inside ... cops later found an extensive weapons arsenal at his home that included assault rifles and machine guns.

Corbett was handcuffed in court while the tape was played. He's facing 19 felony counts including first degree burglary, stalking, and possession of a machine gun.

Corbett pled not guilty and bail was set at $2.2 mil. 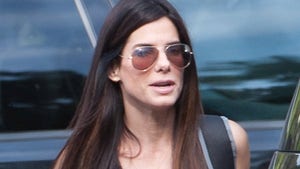