Of course, Rosen's been making headlines for his interview with Bleacher Report about the challenges of juggling school and sports in college.

One quote that has everyone buzzing involved Bama -- "Raise the SAT requirement at Alabama and see what kind of team they have. You lose athletes and then the product on the field suffers."

So, we spoke with McClain -- who played for the Crimson Tide from '03 to '06 (before a successful 7-year stint in the NFL) -- to see how Bama athletes feel about it.

"I think he made some solid points," McClain tells TMZ Sports.

But McClain says Rosen's point rings true for a LOT of Division 1 schools -- including UCLA. 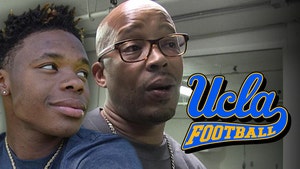